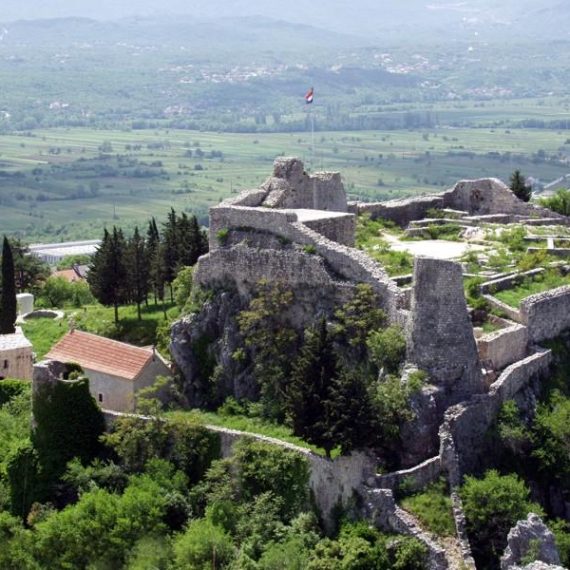 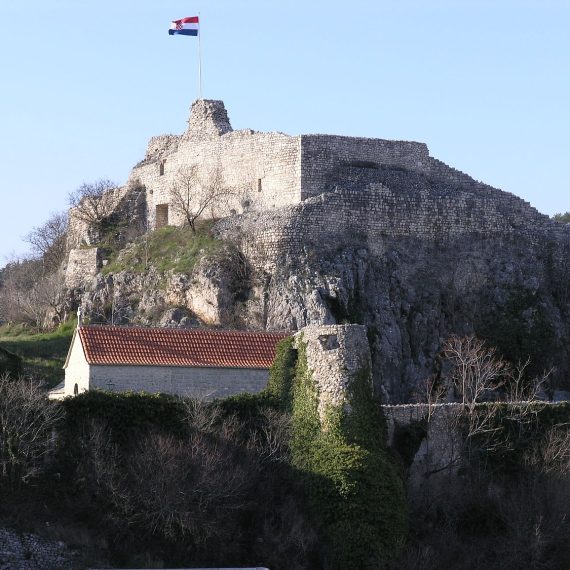 The fertile Imotsko polje (field) has had a key role in the life of this area. In between its almost flat surface and the Biokova massif (1762 m) there is a spacious karst area with a series of alternating hills and bays. The field and the karst area in its immediate vicinity abound in water. The Vrljika River flows alongside the entire field, and Prološko blato in its north-western part becomes a floodplain area during the cold season of the year. Thanks to them the field offers excellent conditions for agriculture. Several karst lakes for which Imotska krajina is well-known are situated in the karst area north of the field.
Not far from Imotsko polje, on the slope of the Podi hill is situated Imotski. It developed from the medieval fortress which was the centre of the Croatian municipality and whose existence in the 10th-century was recorded by the Byzantine Emperor Constantine Porphyrogennetos (τά Ημοτα). The rest of the important settlements were situated by the very edge of the field: Proložac (by the north-western edge) and Zmijavci and Runovići (by the south-eastern edge). Out of the settlements situated further away from the field, it is worth mentioning Zagvozd and the western villages – Studenci, Lovreć, Cista…

The area of Imotski is well-known for its tradition and culture. It is mentioned in the famous folklore ballad Asanaginica which has been translated into a number of European and world languages. The Imotski area is also famous for its ganga – a traditional type of singing which originated at the beginning of 20th-century. Ganga is a type of singing performed in a way that one singer sings verses and the rest follow him imitating the sound of gusle. Finally, Imotska krajina contributed greatly to 20th-century Croatian literature. The greatest credit for that deserves the great poet and writer Tin Ujević (1891 – 1955.). 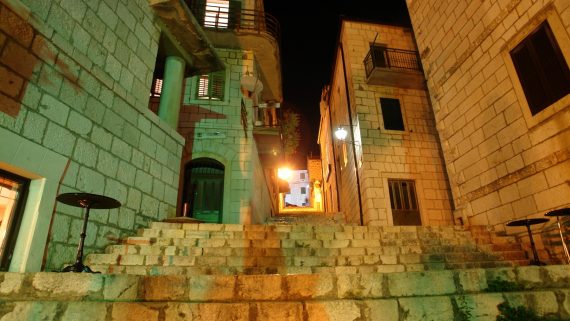 The city core of Imotski

The town centre of Imotski developed at the foot of a medieval fortress. Since the early middle ages Imotski has had an important administrative function although its population was small. The most intensive development of the town took place in the 19th and 20th-century. There are four recognizable parallel streets in its urban structure, linked vertically by numerous stairs. Houses in the well-preserved and protected town centre stand out with their neo-style and Art Nouveau characteristics (the Benzon house), while special atmosphere is created by numerous buildings of a more modest architectural value built in the tradition of the local popular construction. Out of the rest of the buildings, the Franciscan monastery and church are also of significance, along with the former Health care Station (by the entrance to the Blue Lake) and the seat of a tobacco company (Dogana). 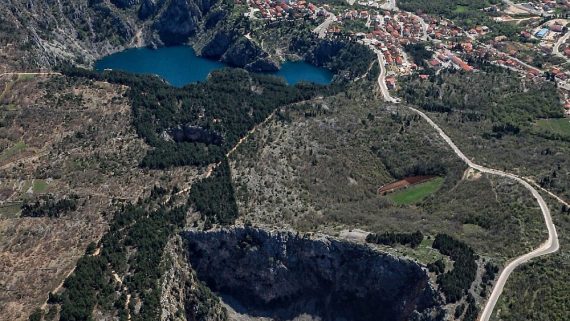 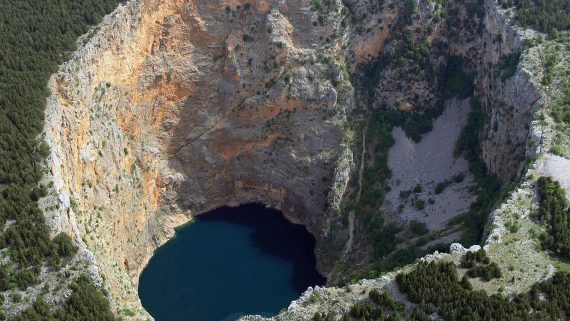 The lakes of Imotski

The lakes of Imotski are two karst lakes situated in the immediate vicinity of the town centre. The Blue Lake (Modro jezero) is a sinkhole, about 150 m deep in its southern part and about 290 m deep in its northern part. The water level varies during the year – sometimes its depth reaches more than 100 m, but it is not uncommon to completely dry out in autumn. Then the bottom of the lake turns into a football pitch for the traditional football game played between the teams of players who live in the quarters at the edge of the lake. Roads (1100 m) which lead to the water were built at the end of the 19th-century. The Red Lake (Crveno jezero), named after its formidable red-coloured cliffs, is situated about 1,5 km west of the town centre. At times its depth reaches up to 300 m, while the total depth of the sinkhole from its bottom (under the sea level) to the highest edge is a total of 550 m. Previous research has not confirmed the existence of communication between the waters of these two natural phenomena. 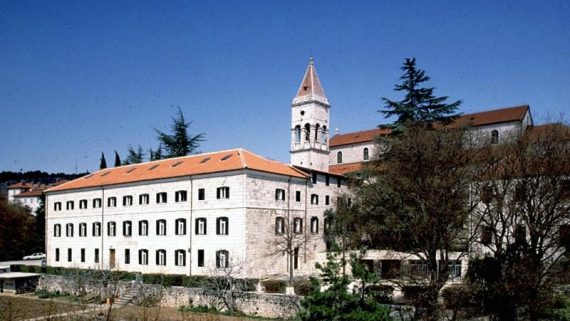 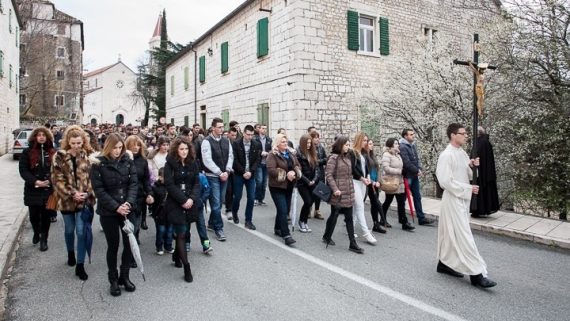 The collections of the town of Imotski

The collections of the town of Imotski preserve remainings from its past and from the past of Imotska krajina. The collection of the Franciscan Monastery is older and richer than the one of the regional museum. It consists of ten separate collections among which the archaeological and ethnographical ones stand out as well as the Pinacoteca with its valuable. A more recent and somewhat smaller regional collection is preserved in part of the Dogana industrial complex in Đirada. In addition to its archaeological, historical and numismatic collections it also contains exhibits from the everyday life of the city and nearby villages as well as the room of the writer Dinko Štambak. 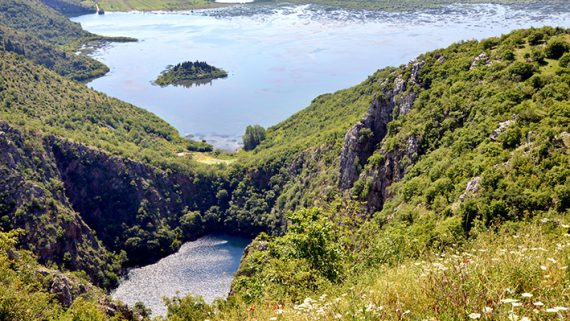 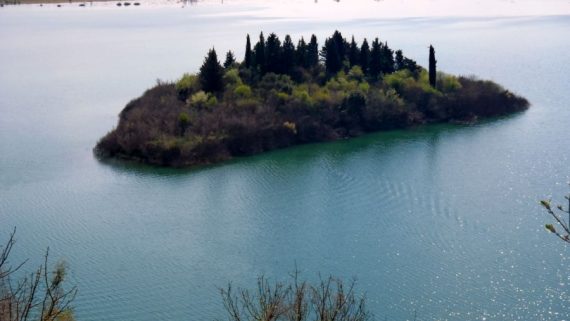 Prološko blato (Proložac swamp), situated at the north-eastern edge of the field, it is one of the last remaining flood karst fields in Croatia. During the high-water season (autumn-winter) waters from Studenci and Ričice areas fill up the Prološko Lake which later flows over its southern edge thus forming a flood area (Blato). The Islet of Manastir (Monastery) containing remains of the 17th-century Franciscan Monastery protrudes from the water. There are three other smaller lakes in the karst area along the very edge of the Prološko Lake, which together with it and with Blato form a single entity/unit. The most interesting of these lakes is the 80-meter-deep Galipovac. 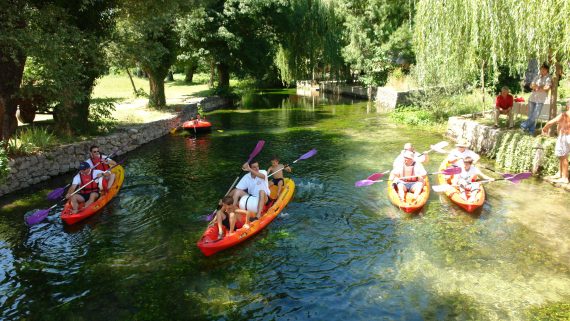 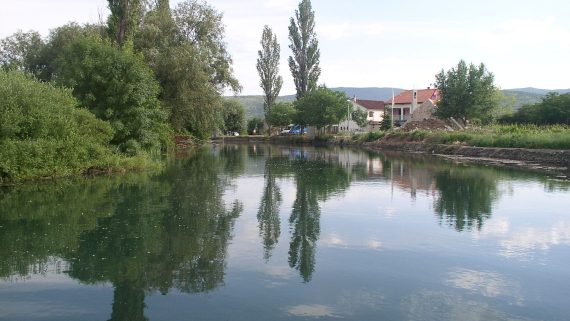 Vrljika is an underground river which flows through Imotsko polje from north-west to the south-east. Its upper stream is an ichtyological reserve. Its waters are the habitat of the endangered species imotska gaovica – minnow (endemic species) and river crabs. There are several major springs (Opačac, Utopište, Dva oka) in Vrljika’s spring area. Alongside them is the well-kept Green Cathedral (Zelena katedrala) – an area where celebrations of the Feast of the Assumption are traditionally held. The single-nave Church of Our Lady of Durmiševac was built in the 19th-century along the road, near the spring Utopište in the 19th-century. Among its valuable inventory particularly stand out the wooden pulpit and a copy of the painting of Our Lady of Sinj (oil on canvas, the work of an unknown artist) 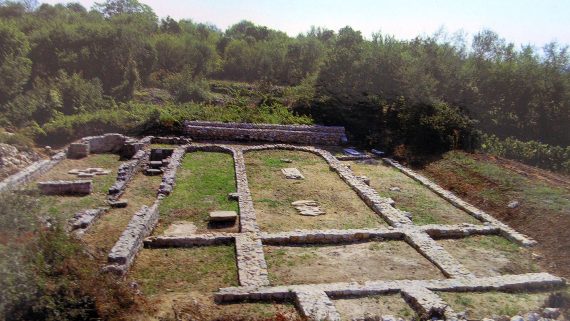 The Basilica of Zmijavci is one of the finest early-Christian remains throughout Imotska krajina. The three-aisled Basilica with its baptistery and tombs dates from the 5th and 6th-centuries. The well-preserved site reveals the Basilica which has a tripartite narthex (entrance hall) in its western section, and two apses (semicircular end) in its eastern section. A round baptismal font is located in the northern nave of the Basilica, alongside the western wall. Separately from the Basilica are the remains of the baptistery.. 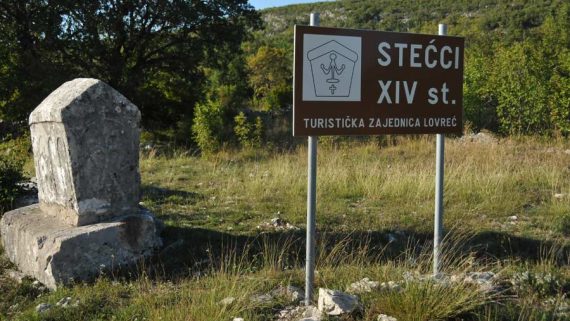 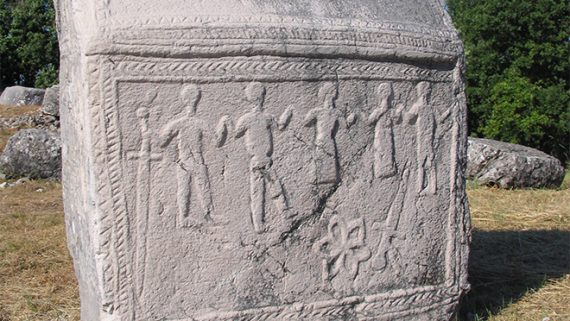 Stećci are medieval tombstones with carved everyday life scenes. A number of stećci can be seen in Bosnia and Herzegovina, as well as in many places in Imotska krajina (Cista Velika, Lovreć, Proložac, Zagvozd…). The archaeological site near Cista Velika contains the largest and most valuable collection of tombstones in Croatia. There are about 90 well-preserved tombstones at this medieval cemetery (14th – 15th-century). There are seven medieval wells near it. 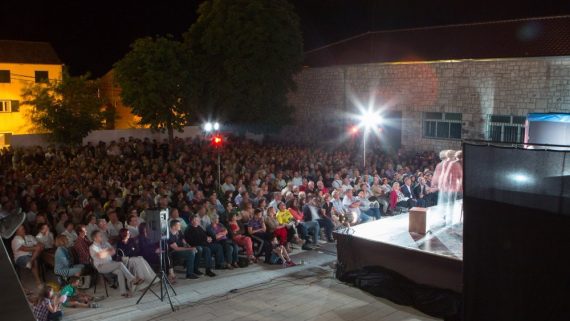 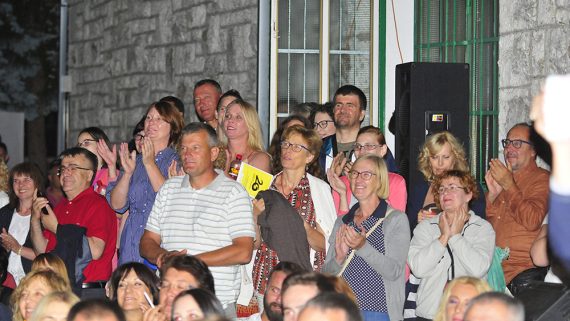 Actors in Zagvozd is an event held there since 1998 upon the initiative of the actor Vedran Mlikota. Theatrical guest performances and occasional music evenings are held there. This summer festival is one of the most important cultural phenomena in Croatia, while Trg glumaca (the Artists’ Square) in Zagvozd is a must-see attraction for all culture lovers who happen to be in the area. 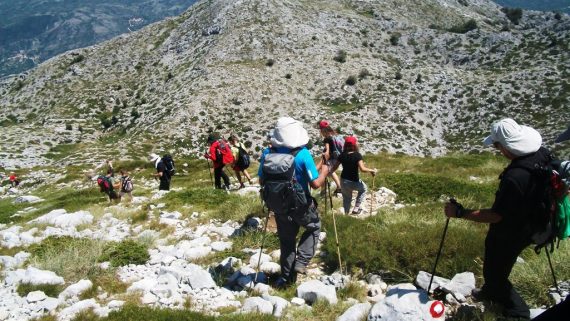 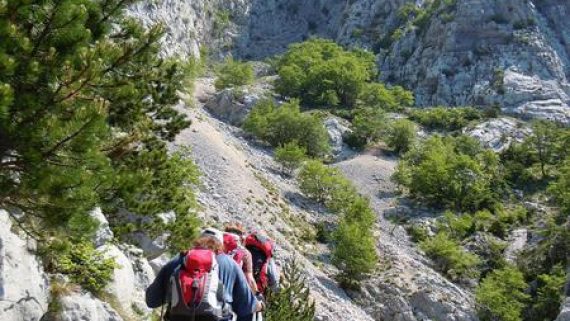 Climbing up the northern slope of the Biokovo 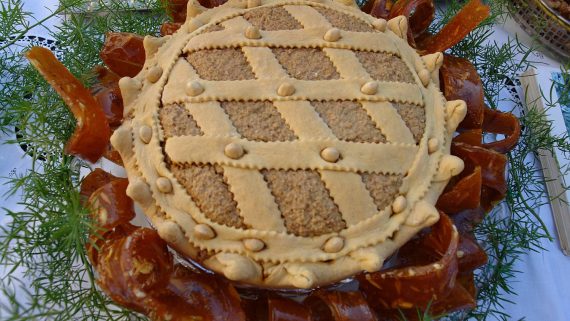 The Imotski gastronomic specialities are an important part of the tourist offer in the area. Along with the traditional dishes on the spit and under a baking lid (pod pekom), the most eminent prize is awarded to the best well-known cheese of the Dalmatian hinterland – the cheese from Studenci produced from full-fat cow’s milk from the north-western hilly part of Imotska krajina. In addition to its salty speciality, Imotski is well-known for its almond and walnut sweets. And apart from the Imotski (style) cake, a great popularity enjoy the so called rafijoli – cookies made out of dough stuffed with ground walnuts and almonds with a hint of additional flavouring.